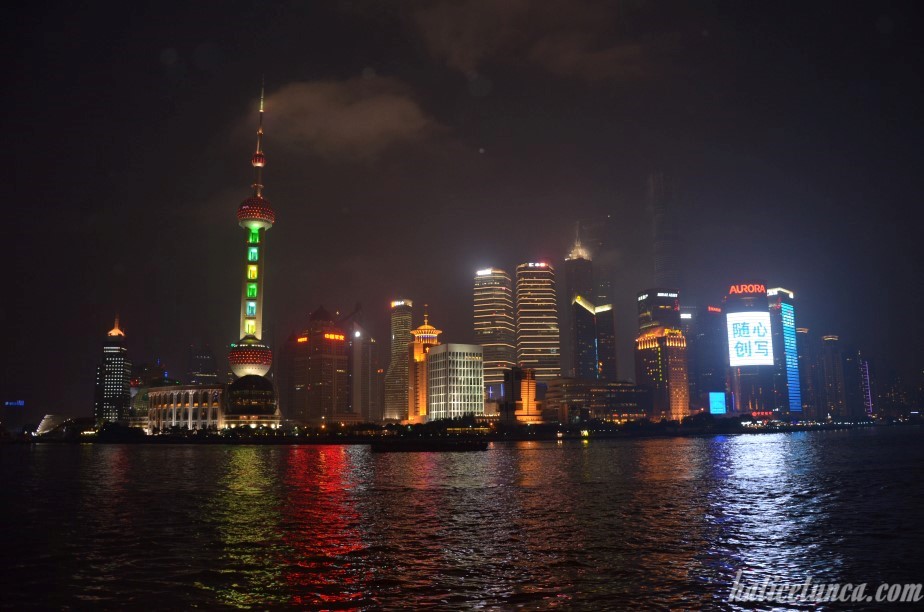 The fourth station of our Far East tour in our 2013 holiday was Shanghai after Guilin. We arrived at Shanghai from Guilin after 02:15 hour flight (Spring Airlines 95 USDs).

We usually ate our meals at Subway in Huangpu Park.

We spent our first day having a rest.

We could go out towards the evening, and visited The Bund. We started from Waibaidu Bridge, Huangpu Park and People’s Heroes Monument in this park, we walked along Huangpu River and took photos of skyscrapers in Pudong. Waibaidu Bridge and Shanghai Oriental Pearl TV Tower look very nice with their changing colored lights. There were a lot of couples to get taken photos on the bridge, and also so many people get taken photos with different poses.

There were a lot of boats in the river which have changing colored lights.

The lights of the skyscrapers turning on at 19:00 and turning off at 23:00 in Shanghai. I think it is a good application for saving 🙂 Even I think so many lights are turned on unnecessarily through the night in Istanbul. The hotel (Seagull on the Bund) we stayed at was also in The Bund, so we enjoyed watching skyscrapers.

In the second day, we started our tour from Nanjing Road which is the most important shopping street of the city. Nanjing Road divided into two parts: East and West. West Nanjing Road is closed to vehicle traffic. There were a lot of people coming to you and trying to sell something like clock, bag..

We arrived at People’s Square, when we reached at the end of the road. It was a quite large square. Shanghai Museum and Shanghai Art Museum take place in this square, as well.

Shanghai Museum is free of charge. It was a quite large museum where more than 120,000 historical works are exhibited. It took 2 hours to visit the museum. Various bronze ware, ceramic ware, jade ware, paintings, ancient coins, furniture, seals, sculptures, masks and clothes are exhibited in the museum. There was “Congo River: Art of Central Africa” exhibition in one of the exhibition halls when we went, various objects from Africa were exhibited there.

We went to famous Yu Garden (Yu Yuan) after visiting museum. It was quite difficult to find the entrance of the garden, the entrance fee was 40 Yuans. Before entering the garden, a lot of people tried to redirect us to tea houses, they said garden seems very nice from there and tried to persuade. We again entered the garden without listening them. This garden was unfortunately disappointed me again. It was like a labyrinth, but there was no sign which shows where to go. It took 1 hour to visit the garden, but I am not sure if we had visited everywhere we could visit. It was quite crowded and I don’t like to take photos in crowded. Dim Sum called Chinese steamed ravioli was very famous here. There were a lot of shops where Dim Sum had sold and usually made with pork.

Dragons have a great importance for the Chinese people which are associated with water in Chinese mythology. Therefore, it is possible to see a dragon wherever.

When we exit from the garden, we reached at Old Yu Garden Street (Yuyuanlao). There were a lot of shops here most of them selling souvenirs. Roofs of shops were built such as roofs of buildings in the garden.

We were planning to go to Shanghai Circus World and watch a Acrobatics Show in the evening, but it was 17:00 when we exit from Yu Garden. We thought that we cannot find tickets and gave up.

We started with Jade Buddha Temple to our tour in the third day in Shanghai. Entrance fee of the temple was 20 Yuans, but you need to pay extra 10 Yuans if you want to see Jade Buddha. OK, it is a small amount of money, but I didn’t understand why the charges to see the Jade Buddha is not specified outside and they get after getting the inside. There were a lot of beggars at the entrance of the temple. The smell of incense greets you when you go inside. There were 2 Buddha made ​​of jade in the temple, one of them was sitting Buddha and the other one was reclining. It was forbidden to take pictures of sitting Buddha.

After Jade Buddha Temple, we went up to Oriental Pearl TV Tower to watch the view of city from a high point. Before going up to the tower, we checked if second sphere is seen from the ground. Because, some part of the tower cannot be seen sometimes due to air pollution and it means we cannot see the ground from the tower.  Shanghai History Museum takes place on the first floor of the tower. Going up second sphere and Shanghai History Museum entrance fee was 120 Yuans total. They don’t accept credit cards in many places in China, this tower was one of the rare places accepted Visa.

Shanghai view from the tower was wonderful. Especially there was a glass based part, although I couldn’t have a courage to step firstly, afterwards I got used to. You can fear when you see jumping people on the glass firstly, but afterwards you can say “Let’s jump”.

After taking photos from the tower, we visited Shanghai History Museum on the ground floor. Visiting museum took half an hour. I should mention that I really admire this museum. Their building such a beautiful History Museum even without using historical artifacts has dazzled me. All ticket types sold for TV Tower includes museum entrance already. I think if you also have such an opportunity, do not return without seeing the museum.

After visiting the museum we were thoroughly hungry. At last we could go to a Turkish restaurant today. We got on 2 number subway line from Lujiazui  station, got off at Dongchang Road station, and after a little bit walking we arrived at Efes Restaurant. We ate very nice meals here, after 10 days we spent apart from our hometown.

After having lunch, again we got on 2 number subway line, got off East Nanjing Road station and walked to Shiliupu Pier. Boats depart from here for Huangpu River tour. 1 hour tour costs 100 Yuans. We watched brilliant night view of Shanghai once again with this tour, and watched sky where the lights of the city reflecting. Despite the rain, we enjoyed the view without going inside the boat. Today was one of the best days we spent in China.

We would like to visit Ancient Zhujiajiao Water Town famous for its canals if we had opportunity, but we didn’t have enough time. The next day we went to Beijing by high-speed train.