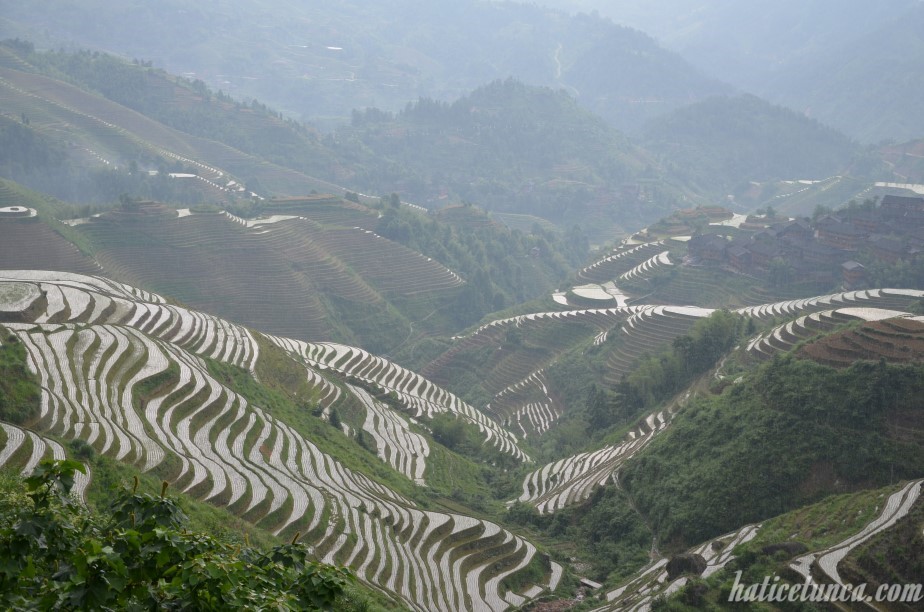 The third station of our Far East tour in our 2013 holiday was Guilin which takes place in south-east part of China. Guilin means “forest of Sweet Osmanthus”. We arrived at Guilin from Guangzhou after about 14 hours travel by train (soft sleeper 382 Yuans).

Firstly, I should say the weather was very hot and humid. So, it was tiring for us. One more thing that caught my attention was the vehicle’s passing even in red light.

Bus ticket costs 1 Yuan wherever you go. 1 Yuan is put to box, when got on the bus.

Usually we ate meals at KFC, but it was more oily and heavy.

Guilin is famous for its karst hills and wonderful nature. Even this beautiful scenery takes place on the reverse side of 20 Yuan banknotes.

In the first day, we went to Reed Flute Cave (Lúdí Yán) by 3 number bus. Entrance fee is 90 Yuans and it is a guided tour. Guide told in Chinese, so it didn’t help us. As I understand from people’s reactions, some rocks in the cave resembled in some shapes, and made up stories about them. The Cave was similar to Damlataş Cave in Turkey, however it was larger than Damlataş Cave. It was decorated with colorful lights. But, guide was turning on lights when visiting inside. So, we had to follow guide to catch up lights. We were a little nervous because we could not take photos properly. Cave tour lasted 1 hour.

We had planned to go to Elephant Trunk Hill (Xiangbishan) (75 Yuans) after visiting the cave, but we decided to go to Seven Star Park (Qixing Gongyuan). Entrance fee of the park was 75 Yuans. There was another cave in this park, entrance fee was 60 Yuans, we didn’t visit there. There was a lot of activity field in the park and all had separate entrance fees. I would like to visit zoo and see pandas, but its entrance fee was 75 Yuans, so I gave up and decided to go to zoo in Beijing. Park was nice and large, but it doesn’t worth to pay 75 Yuans. I wish we would allow time for Elephant Trunk Hill, but we have seen Camel Hill instead of Elephant Trunk Hill. I think, it is so expensive because it’s source of livelihood is tourism.

We went to see Sun and Moon Pagodas after Seven Star Park. These pagodas in Fir Lake (Shān Hú) were worth to see.

Let’s talk about the second day of our Guilin tour. Which was probably the most tiring day of our vacation, however it was the best day and worth to be tired. We went to Guilin Railway Station to go to Longji Rice Terraces early in the morning. There was a lot of people trying to sell daily tours when we arrived at the train station the day before. So, I thought we can find a bus to go to rice terraces. If we cannot, we would go to Qintan Bus Station to go to Longsheng. According to my search in order to see rice terraces there were 2 villages which we can go by transfer from Longsheng  Town or Heping: Ping’An and DaZhai (JinKeng). There were 2 scenic spots in Ping’an Village (No.1: “Nine Dragons and Five Tigers”, No.2: “Seven Stars Accompany the Moon”), and 3 scenic spots in DaZhai village (No.1: “Music from Paradise”, No.2: “Qiancheng Ladder to the Heaven (Thousand Layers to the Heaven)”, No.3: “Golden Buddha Peak”). We were planning to go to Ping’An because it was closer. We asked price of Longji Rice Terraces tour to a daily tour seller and bargain had been started. He firstly asked for 250 Yuans per person. But, it would cost totally 50 Yuans per person according to my search again, including going to Heping by bus for 40 Yuans, and going to rice terraces from there for 10 Yuans. At last, we agreed for 65 Yuans per person, and he took us to Qintan Bus Station and told to assistant girl of the bus where we wan to go. We got on the bus, but I were worried about if they will take us to correct place. And then, we arrived at Heping after travelling 2 hours by bus, and we arrived at entrance of DaZhai village approximately travelling 1 hour by bus from Heping. We were surprised because we insisted on going to Ping’An, but they took us to DaZhai. Eventually, we would see rice terraces. Meanwhile, minibus stopped at ticket office and a young lady sold us tickets in minibus (entrance fee was 80 Yuans). There was a cable car in entrance of DaZhai to go up one of the scenic points, but we preferred walking. Single ticket was 70 Yuans, and return ticket was 120 Yuans. I should mention our bus journey also: The bus driver blew loud horn so often until we arrive at Heping, they use the horn for warning here. After Heping, we transferred a minibus and continued no waiting. Minibus adventure was can’t put into words, you have to experience it. There were so many pits in the road, it was quite bumpy and fast, and we felt like we’ll fall off the cliff at any moment until we arrive at the village. Again, driver blew loud horn in bends. Also, it was so surprising for me seeing Chinese people can sleep in this minibus. Let’s tell about going up rice terraces. At first, we followed crowd, we didn’t see any proper signboard. Weather was very hot and we stopped everywhere we saw shadows. We thought to return back so many times when going up, it was so tiring, and we wondered if there is a scenery which worth to see.

Friendliness of the people we saw when going up impressed me. Many villagers greeted us smiling and saying “hello” or “nihao” 🙂

Scenery was even more beautiful as we went upward. As we see magnificent scenery and “Music from Paradise” signs, we continued on our way.

Weather got cloudy and a bit cooler, and then rained nicely. After it rained, the scenery was so nice. We saw exactly mirror like view of the rice terraces.

We went up to the top in 3-4 hours having a rest in some spots. We took a lot of photos and enjoy the scenery. Then, we could return back to the village in 1-1.5 hour.

There were a lot of shops in the village where herbal teas are sold.

And let’s talk about long hair women. Women living in this village do not cut their hair. They bun their hair on their head. Their hair is very shiny, jet black and looked well groomed. They wear mostly the same clothes: a black skirt, a pink or white a blouse and socks, shoes.. There is something that hurts me inside: these ladies carry giant suitcases of tourists up to the hill and they only earn 20 Yuans as I read. We even were forced to go up without any bag in the hot weather, but ladies were going up with a suitcase in their back. We have likened them to the women living in Black Sea region in Turkey.

When we come back from rice terraces, we saw the fruit sellers and bought fruits which were like apple. I thought it was a sour apple, but it was pear 🙂 We also bought tomatoes, we still remember their delicious taste. Which were smelling very nice like tomatoes in our villages.

We went to Heping for 10 Yuans, and from Heping to Guilin for 20 Yuans when returning back. So, if we went to the village from Qintan Bus Station by ourselves, we could pay only 30 Yuans. When we came back to Guilin, we visited night market in the street of the hotel (Sapphire Hotel). It was a large market where souvenirs, jewelries, clothes… are sold.

I thought we could have a Li River tour on the last day in Guilin, but unfortunately were unable to arrange the tour. If we could have Li River tour, maybe we would have the opportunity to see China’s traditional fishing with cormorants, but we missed it. We decided to go to Yangshuo by bus. Yangshuo is surrounded by the karst hills as I expect to see in Guilin. There are two famous streets where a lot of craft shops, souvenir shops are placed: West Street (Xi Jie) and (Diecui Lu). We walked in these streets, and then went to the river side. There were a lot of bamboo rafting tour sellers there. Prices were 100 Yuans, and  they were lowering the price 70 Yuans by themselves, when we didn’t accept to buy any tour. We spent a little more time in Yangshuo, and went back to Guilin because we had flight to Shanghai in the evening.

When we returned to Guilin, we saw a lady selling fruit in her baskets. Again I saw a different fruit, I need to taste 🙂  It was a little bit like a pear as external appearance, but we wanted to cut the fruit from lady, and she peeled and divided into four parts. Inside was like a melon. I think, she tried to describe to eat with its pits. Its taste was like melon, pits also was not so hard, I ate with pits 🙂

It was a different experience for us to see Guilin. We chose China for vacation maybe because of Guilin. We couldn’t have a Li River tour and see fishing with cormorants, nonetheless Guilin was still the best part of the holiday for me.