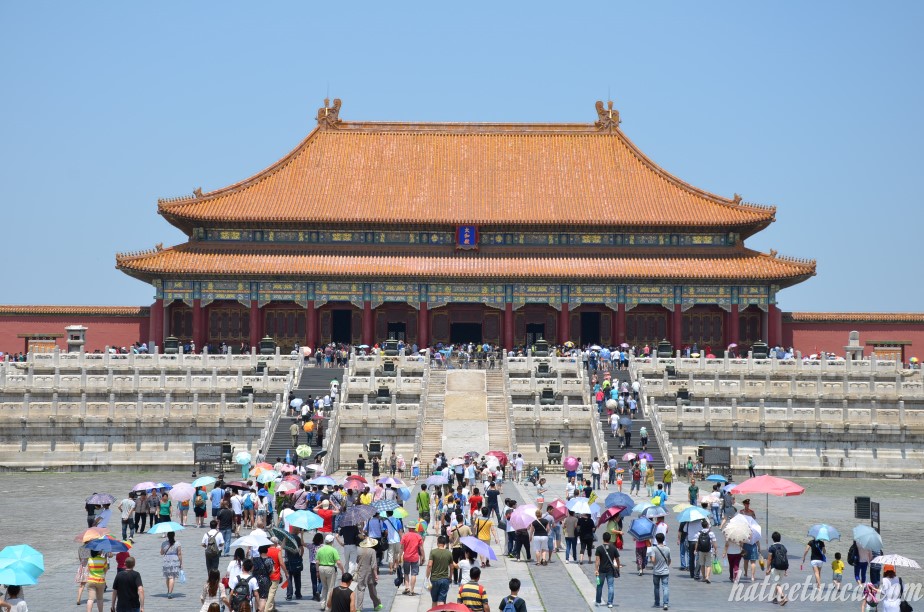 Beijing, capital of China was the last city we have visited in our 2013 holiday. Beijing means “northern capital”. It takes about 5 hours high-speed train (553 Yuans) travel from Shanghai Hongqiao Railway Station to Beijing South Railway Station.

We started with Forbidden City tour in the first day. This Chinese imperial palace was used only by the emperors for almost 500 years and  it is used as the Palace Museum since 1925. The Forbidden City was declared as UNESCO World Heritage Site in 1987. Palace Museum entrance fee is 60 Yuans. A lot of guides want you to buy guide service in the entrance. Also, so many guides try to sell excursion tours to the Great Wall of China. We bought our ticket for Palace Museum and started our tour. The weather was too hot.

The Forbidden City was a disappointment for me anyway. Okay, it placed over a wide area, China Architecture is also nice, but not anything else. I took the following photo where people crushed each other. I thought there is something very nice inside when I saw the crowd, but this image did not meet my expectations. Let’s see the photo..

The buildings here are all made of wood. There were dragon figures here, as everywhere in China.

The Forbidden City was so great that even after visiting Ceramic Museums at last, we were sure that there were places we didn’t visit. We went to Temple of Heaven (Tiāntán) which is famous for its acoustics after visiting Forbidden City. The entrance fee is 35 Yuans including Hall of Prayer for Good Harvests (Qi Nian Dian), Circular Mound Altar (Yuan Qiu Tan) and  Eco Wall. The Temple of Heaven building is completely wooden, with no nails. Earth was represented by a square and Heaven by a circle. So, the circle-shaped buildings built on the square-shaped bases. The most important function of the temple is being used to the Emperor’s pray for the year’s crops. To do this, the emperor makes meditation after fasting 3 days and, at this time talks to gods. In the next morning, he would offer sacrifice in Circular Mound Altar to Heaven on the day of the Winter Solstice (between December 20 to 23) every year. No ordinary Chinese was allowed to view this procession or the following ceremony.

Circular Mound Altar is used by the emperor for sacrifice. This circular platform has three levels of marble stones which represents human, earth and heaven. The center of this altar assumed as the center of earth.

Let’s tell about our famous Great Wall of China tour. According to my researches before coming to China, the closest sections to Beijing city center of China Great Wall were Badaling and Mutianyu. Badaling section is preferred to Mutianyu section by tourist tours, because of Badaling is closer to city center and there is chance to visit Ming Tombs in return. Therefore, Badaling section is more crowded than Mutianyu. We decided to go to Mutianyu section to be away from the crowds and take photos easily. Access to Mutianyu seemed to be more difficult than Badaling. We dealt with one of a tour guide who tries to sell daily tours near Tiananmen Square the day before. Mutianyu Great Wall, Ming Tombs, National Stadium (Bird’s Nest) and National Aquatics Center (Water Cube) would be visited according to tour route. English guide and lunch was included in this daily tour and fee was 100 Yuans. We decided to buy this tour not to have difficulty in transportation.

Let’s talk about the facts:

We have been picked up from hotel (CityTel Inn) at 07:30 in the morning and our journey has started. We realized that we were going toward Badaling, not Mutianyu after travelling a long way. Of course we have raised a stink, but it was too late. It was impossible to return back and go to Mutianyu section. Anyway, now we had to go to Badaling section. Firstly, we have visited the jade factory. Jade is very important for Chinese. Even when the girls getting married, mother-in-law gives a jade bracelet which was given to her when married. One of the most interesting object was happiness ball which consist of nested balls. It is interesting that this object is made of one piece. Nested balls mean continuity of generations. Cannot breaking the inside balls means unity and power of the family.

Cabbage is one of the most important objects because it symbolizes abundance.

Nine dragons are believed to bring good luck in China can be seen everywhere.

After visiting jade factory, it was time to visit Great Wall of China. Great Wall is considered as one of the world’s new seven wonders and takes place in UNESCO World Heritage list. It is started to be built in centuries BC, and about 7000 km long. We had one hour free time in Juyong Pass of Great Wall, and started climbing up the stairs. Stairs were thoroughly worn because of so many visits. It was hard to climb up stairs because steps have different heights. We returned back after climbing up 30-40 minutes. This was a fairly small section of the Great Wall, do not expect to see walls extending such as chain. But it is very tiring to go up and down even this part.  Unfortunately, nowhere could be seen clearly due to air pollution.

After then, I had thought that we would go to Badaling section, but we had already return back and had completed more than halfway 🙁 There were three different groups in our tour, and each group had a different route from each other. I wish we had gone to the Mutianyu section ourselves, but it was too late. Today passed away foolishly, and unfortunately we didn’t have an extra day to visit Mutianyu section 🙁 Regarding meals, it was okay.  Eating with chopsticks was a little difficult, but luckily there was something we could eat. We have tried China’s famous steamed dim sum here. We have seen it was sold in many places, but had not eaten since it contained pork. There was vegetable in it here, but I did not understand which was it. We went to the foot massage after lunch. I thought it would be a hard massage, but they made in a very simple way. They advertised and tried to sell herbal medicines, teas.

We went to the Silk Museum after foot massage. Here, they showed how to make silk quilt. They were selling a variety of silk fabrics and quilts. So, unfortunately, we were brought here for shopping. Moreover, our guide had so surprised when she heard that silk is used and produced in Turkey, too. I think she thought silk is special to China. Especially when we have told how to distinguish real silk, she had more shocked. She confirmed by asking the officer distinguishing real silk by burning it.

After then we went to the Olympic Park, and we wanted to end up this terrible day here. When we say we do not want to continue the tour, the guide was still talking about going to the tea house and wanted tip for the driver. Finally, we returned back to the hotel, and on the way we saw guide who sold us the tour, and told our complaints. He said he could arrange a tour to Mutianyu for the next day, but we have been wasted already today and did not want to risk the next day. This time he offered Kung Fu show, we refused him, and we definitely decided not to attend any tour. In the evening, we went to Tiananmen Square again and be able to watch flag lowering ceremony at this time.

The third day, we started our trip from Summer Palace (Yiheyuan). Entrance fee including Suzhou Street, Tower of Buddhist Incense (Fo Xiang Ge), Garden of Virtue and Harmony (Deheyuan) and Wenchang Gallery was 60 Yuans. Summer Palace is a pretty big place and travelling takes quite a long time. You can take plenty of colorful photos. There is not so many signboards here, as in other places. When we come to the end of the huge garden, we could see signboards which says “100 meters to Garden of Virtue and Harmony “. There were a lot of people selling maps in the entrance, I think there is no signboards to be able to sell maps :S

We went to Beijing Zoo after Summer Palace. Though my intention was seeing China’s famous pandas, I’ve seen a lot of animals I haven’t seen before.

After visiting the Zoo, we went to Wangfujing Street, the last time we have visited here. We wanted to eat roasted duck in our last dinner in Beijing, but it was late, and most of restaurants were closed. We decided to eat duck at lunch the next day. Unfortunately, the last day we noticed a branch of Dong Lai Shun restaurants (one of them is on Wangfujing Street) next to the hotel that we stayed. We passed in front of it so many times, we saw boiling water containers in the middle of the tables and, we thought that it was a Chinese restaurant. Meals were delicious and, prices are also affordable. After having our lunch we went to airport. Our flight delayed 4:30 hours and we got very tired.

Finally, I want to say followings about China and Chinese people:

-It was very crowded always; business hours, on weekdays, weekends does not matter.

-No concept of queue, 10 people can pass in front of you at any time.

-There are so many people who spitting on the streets.

-The toilets are free. There is no lock on door in some of them.

-They like to get taken photos with tourists and they are usually doing the victory sign when getting taken photos.

-Too much green tea consumed.