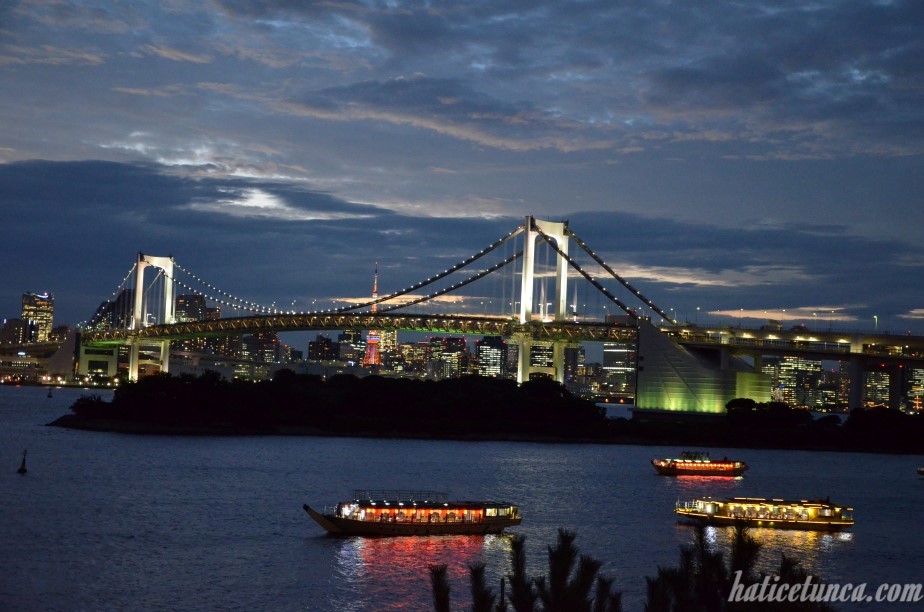 On Sunday we arrived at Tokyo from Shin-Fuji by JR line shinkansen train, train ticket was 5070 Yens per person. We were so tired and, we went to the hotel (Hotel Lungwood) and rested.

Tokyo was known as Edo until 1868, and its name was replaced by Tokyo which meaning “Capital of the East” which was chosen as the new capital by Emperor Meiji, who ended the Shogun management. Having suffered great damage from the 1923 earthquake and the American bombardment of 1945, Tokyo grew rapidly after 1950.

The next day we felt deeper pain. We did not have to go around because of back, waist, leg pain. However, after lunch we went to Akihabara where electronic goods were sold. Then we went to the Odaiba Area which is built filling the sea and took lots of photos.

We thought we should dine before we went to the hotel and we entered Kua ‘Aina Burger. When the cashier learned that we are Turkish, he said he had been to Istanbul and Cappadocia. It made me very happy that Cappadocia is so known, but I am very sorry that we did not show enough interest to our natural wonders while they are visiting them from thousands of kilometers away. We returned to the hotel after a little chat with him and eating our hamburgers.

We thought we would trip more on the second day, and we bought a 1-day ticket (1000 Yens) which is valid on the Tokyo Subway and Toei Subway lines.

We started our trip with Asakusa. When we going to Asakusa, we saw arcades here also which has shops on the right and left sides, as we saw previously in Osaka and Nara.

Like the other cities of Japan, the fancy manhole covers here are also interesting.

In Asakusa, we firstly visited Nakamise which is Japan’s oldest shopping center. Here, there are shops selling souvenirs and famous Japanese clothes yukata. And there are shops mostly selling snacks.

The Asakusa Kannon Temple (Sensō-ji) is also quite large and impressive. After visiting this temple and taking lots of photos, we went to Shinjuku.

We went to Shinjuku Gyoen National Garden firstly, and then we wanted to watch Tokyo view from the Tokyo Metropolitan Government Building during sunset. The entrance fee is 200 Yens. This is a quite large and pretty garden. It was very hot again, I think it would be better to visit here in spring to see the colorful flowers and not the weather be so hot. The park is decorated in French, English and Japanese gardens. There is also Greenhouse in which you can see artificial waterfall and various flowers.

Taiwan Pavilion (Kyugoryotei) in the garden is also the most interesting part.

After visiting the Shinjuku Gyoen National Garden, we went to the 45. floor of the Tokyo Metropolitan Government Building and watched Tokyo view. The south viewing terrace of the building was closed on the first and third Tuesdays of each month and the northern part was closed on the second and fourth Monday of each month. We did not see the southern part because it was the first Tuesday of the month. Entrance is free. Souvenirs are sold inside. Souvenirs can also be bought here because the prices of souvenirs are almost the same throughout the city.

The sunset and the view of Tokyo were quite pleasant from here. It was even nicer to see Mount Fuji.

In our last day in Tokyo, we started our trip with Ameya in Ueno area to buy souvenirs. There were fruit and fish sellers here but not souvenir shops.

In Japan, there are beverage vending machines everywhere, and as far as I can see the prices were the same.

We went to Akihabara again after Ueno to look for electronic goods and to eat. The last time we saw this place, we returned to the hotel to get our luggage. Then we said farewell to Tokyo.

Ginza District, the most populous district of Tokyo, where restaurants, shopping centers are located, and the Roppongi Hills, the center of nightlife, are on the list of places to see Tokyo, but we have not taken much care of it. I wanted to see the gardens of the Imperial Palace, but we found out that we had to book in advance to check in, and unfortunately we could not. I would like to go to Tsukiji Fish Market here because we could not go in Seoul, but we can not see here either. We would go to Nikko, a day trip from Tokyo, but we could not visit it because of risk of missing the plane on our last day.

Finally, we admired at Japanese since they take the money with the plates at the grocery stores, the harmony of the rows, the regularity, the cleanliness, the calmness, the honesty, the continuous thanks. There are more beautiful cities in the world than Japan’s cities, but I do not think that there are more excellent than their nation.

Our flight from Tokyo Haneda International Airport (HND) to Istanbul was by transit in Doha. We had an 8 hour wait between flights. If we had known before the free Doha tour that Qatar Airways had organized, we could have the opportunity to see Doha. However, after we spent 4-5 hours at the airport we saw this from the internet. We used Doha this time as a transfer point, we could only take photos from the plane.