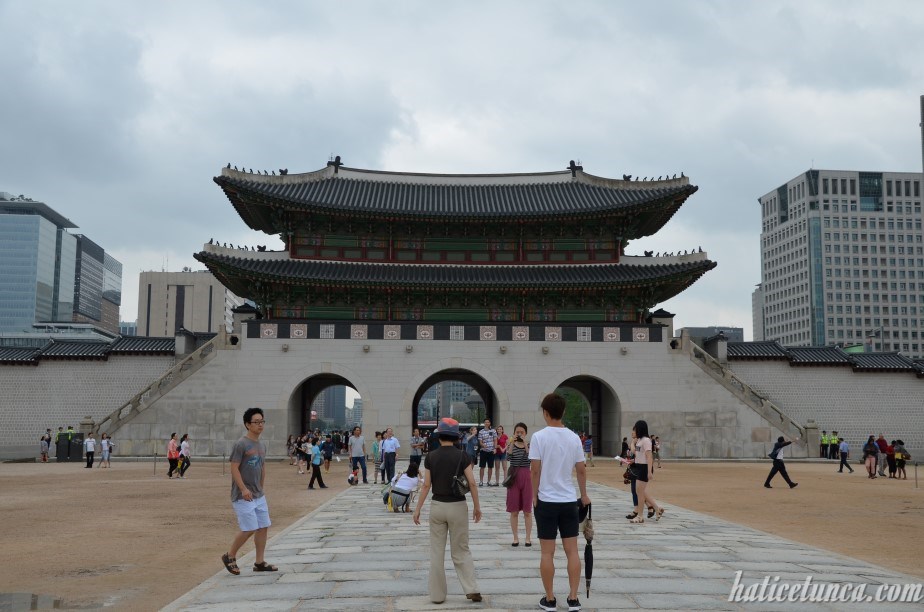 The first station of our 2014 holiday was Seoul, the capital of South Korea. Seoul means “capital”. Time is 6 hours ahead of Turkey in South Korea. Our flight had taken totally 13 hours by Qatar Airways by stopping in Doha (Istanbul-Doha 4 hours, Doha-Seoul 9 hours). We arrived at Incheon National Airpot (ICN) after this long travel.

Traffic works from left side in South Korea. Turkish Citizens who have regular passports don’t need visa for 90 days in their travels. Arrival – departure cards are being filled for visa. Total flight tickets Istanbul-Seul (24.07.2014) and Tokyo-Istanbul (07.08.2014) cost was 520 Euros when we bought tickets on 23rd of April, 2014.

Subway price was 4350 Wons for going to Mokdong station from Incheon Airport, including 500 Wons deposit. You can get your deposit back when you returning the card to the machines in the subway stations you get off. Subway ticket prices were starting from 1150 Wons and changing according to distance. You can buy ticket from machines in the subway stations. Music was differing in the transfer stations.

Sockets were different in South Korea than in Turkey, however no need to use converter.

The weather was very hot. Temperature was not decreasing even it was raining. We always took our umbrella with us for protection from heat and rain. If we talk about people, of course technology shows itself everywhere. Everybody – from youngest to oldest – has smartphones in their hands and earphones in their ears. The ladies are mostly dressed in mini shorts, skirts, and the shoes are so chic.

There were places like Mc Donalds, Burger King, Subway, Baskin-Robbins especially near subway stations, where you can eat something.

On the first day we started our tour with palace visits. The combined entrance ticket for Gyeongbokgung Palace, Changdeokgung Palace, Changgyeonggung Palace, Deoksugung Palace, Jongmyo Shrine was 10000 Wons. Ticket valid for 1 month from date of purchase. Tickets have information about visit days/times, times of guided tours, access methods and history of these places. Gyeongbokgung Palace and Jongmyo Shrine closed on Tuesdays, and other palaces closed on Mondays. English guided tours were available for Changdeokgung Palace at 10:30, 14:30 times which is taking 60 minutes, and for Secret Garden at 11:30, 13:30 and 15:30 times which is taking 90 minutes. We have previously researched and planned to join guided tour for palace at 10:30, and for the Secret Garden at 11:30. We arrived at palace getting of Anguk Station of 3 numbered subway line, exiting from Exit 3, and then a little walking.

When we left the palace, we saw a small vehicle selling pies. We wondered its taste and bought. I thought it was salty, however it was sweet with cinnamon 🙂

English guided tours were available for Gyeongbokgung Palace at 10:00, 13:30, 15:30 times which is taking 60-90 minutes, but we strolled here ourselves without guide.

Fermented foods, soy sauces had been kept in these pots.

We visited National Folk Museum of Korea after Gyeongbokgung Palace.

The museum also has an open-air exhibition area. Here, there was “Streets of memory” where displaying the reproduction of former shops.

We started our tour with the National Museum of Korea in second day in Seoul . But the museum is so big that we couldn’t visit the whole museum. Entrance to the museum is free. If you want to visit special exhibits, you are only charged for visiting them.

After visiting the museum, we arrived at Jongmyo Shrine after getting of the Jongno-3(sam)-ga subway station and walking about 10 minutes. English guided tours were available at 10:00, 12:00, 14:00 and 16:00 times which is taking 60 minutes. We had to wait for the tour to start even though we were there at 15:00. We had to sit in the park near the temple for 1 hour and join the tour at 16:00. The Jongmyo Shrine was added to the UNESCO World Heritage List in 1995.

The “Deumeu” meaning “big bucket” using as fire hydrant, that contained water to put out fires. It is believed that the evil fire spirit is so repulsed by his own reflection on the surface of the water, that he runs away upon seeing it.

After visiting Jongmyo Shrine, we decided to go up N Seoul Tower to watch the sunset. We got off Myeongdong station of 4 numbered subway line, walked about 10 minutes to get on the elevator for getting on cableway. The round-trip ticket for cableway to N Seoul Tower was 8500 Wons.

The entrance fee for the tower including 2 drinks and popcorn was 20000 Wons. The entrance ticket for only the tower was 9000 Wons.

We returned to the hotel (Korstay Hotel) after visiting N Seoul Tower. When returning we bought small desserts containing sweet corn souce in it  from Deli Manjoo shop we saw in the subway station. When we saw the Turkish flag in the shop, we also took its photo.

The desserts were so delicious. But, do not eat them as soon as buying them. The sauce inside is so hot, be careful not to burn your mouth like me 🙂

On our third day in Seoul, we went to Gangnam first. Gangnam did not get interest of us and, we decided to go to the Bongeunsa Temple. We arrived at temple getting off Cheongdam station and walking about half an hour.

Bongeunsa Temple was one of the most beautiful places we visited in Seoul for me. The palaces, the tower is nice, but it did not appeal to me because we saw better in China.

If I had the opportunity in Seoul, I would like to see the Nanta Show, which costs between 40000 and 70000 Wons. I also wanted to visit at least one of Gyeongdong Market, Namdaemun Market, Dongdaemun Market and Myeong-dong, Itaewon, Insadong Streets recommended for shopping.

The next day we went to Incheon International Airport early in the day for our flight to Osaka at 10:15.