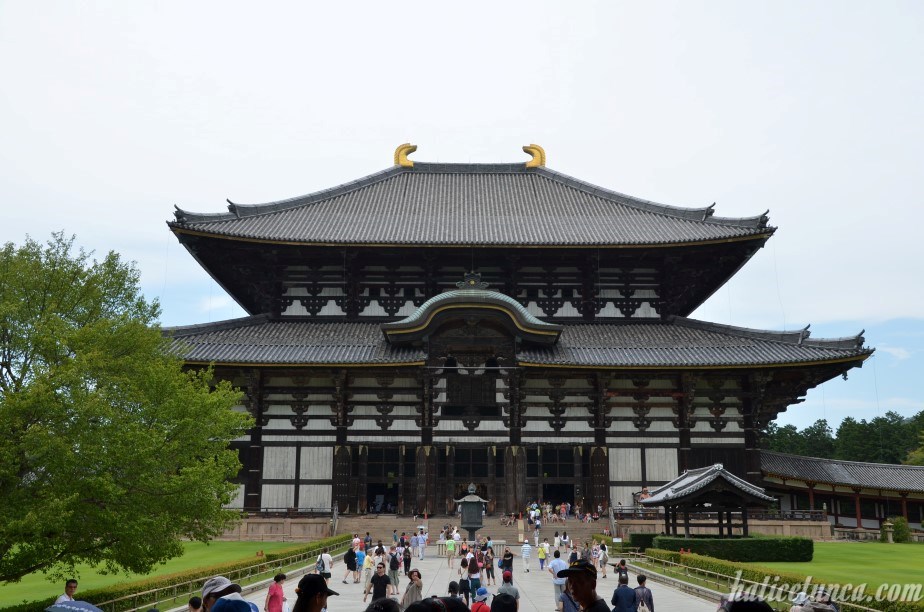 We went to Nara for a day trip on Wednesday from Osaka. We went to Nara using 4-days valid JR-West Rail Pass (Kansai Area Pass) train ticket (6170 Yens per person) which we bought the day before. We thought that this ticket was also valid on subway lines, actually we did not have to take it just to go to Nara. Tickets were valid on JR lines in Kansai area, such as Osaka, Kobe, and Nara. You show this train ticket to the officers at the stations, not to the tournaments like the other tickets. The trip from Osaka to Nara takes about 1 hour. We visited Kōfuku-ji Temple, Nara Park, Tōdai-ji Temple and Kasuga Taisha Shrine in Nara, which takes place in the UNESCO World Heritage List, and returned to Osaka.

From JR Nara Station, it takes 15-20 minutes to walk to Kofuku-ji Temple. We also started our tour with this temple first. On the way to the temple, a few arcades caught our attention. There are shops on the right and left sides in these arcades. Such places of shopping had also caught our attention in Osaka the previous day.

We started to see Nara’s famous deers here. They surrounded the tourists and trying to eat the crackers 🙂

Since Kōfuku-ji Temple was on the way to the other temples, we passed through this place on the way back also. When returning, the weather was a little cloudy and it was less crowded. So, I think the photos were more beautiful.

After Kōfuku-ji Temple, we proceeded towards Tōdai-ji Temple. When we reached the place where the lake was, we thought temple was ahead and continued. We noticed later that we passed by the front of the building 🙂

There were signs in many places in Nara those indicating we should be careful about the deers.

As we moved forward from the temple we continued to see other parts of the temple.

When we realized that we passed the main building of the temple, we decided to come here again after seeing Kasuga Taisha Shrine. The photos from here are the photos we took on the way back.

There is a 15 meters high sitting Buddha statue in the main building (Daibutsuden) of Tōdai-ji Temple, the largest wooden building in the world. Entrance fee is 500 Yens.

After seeing other parts of Tōdai-ji Temple, we followed the signs and found the Kasuga Taisha Shrine which is famous with its lanterns. It was a very colorful temple and I think these three temples in Nara were worth seeing. Since they are already close to each other, it is possible to visit all of them on foot. You can even visit 2 times like us 🙂

After the Kasuga Taisha Shrine, we followed the signs again through Nara Park, established in 1880, to see the main building of Tōdai-ji Temple.

You can see deer almost everywhere in Nara. They are so accustomed to people and, getting crackers without waiting to give them. Be careful not to be bitten 🙂 Crackers are sold in temples and in some places in the park to feed deer, a small packet cracker 150 Yens.

Nara Park was also pretty. Due to the very hot weather, we could proceed relaxing many times on the way.

Manhole covers of Nara are decorated with deer.

We returned to Osaka after a day trip to Nara. The next day we went to Kyoto from Osaka.