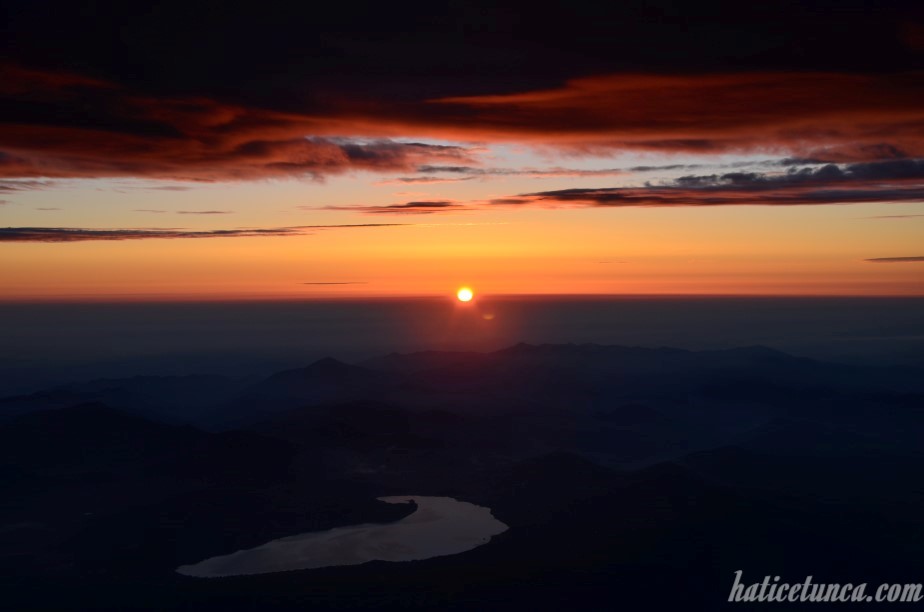 The day we waited for 3 months is finally here. We got up early in the morning to go to Mount Fuji, but we were able to catch the train at 10:00 because of hotel check-out processes, and arriving at the train station. The trip from Kyoto to Shin-Fuji by JR line shinkansen train lasted 2.5 hours and the fare was 10360 Yens. When we get to the station, our first job is to change our clothes, to prepare our bags, and then to leave our luggage. After we left our luggage, we got our bus tickets to Fujinomiya 5th Station. The round-trip bus fare was 3100 Yens and was valid within 3 days. While buying the bus ticket, they gave brief information about climbing to Mount Fuji, a chart showing the bus times and a few brochures about climbing to Mount Fuji. Since we were about to miss the bus, the lady selling the ticket showed us the bus coming with us  instead of telling us where is the bus. Yes, once again admired the Japanese 🙂 We could catch the bus at 13:20 and when we arrived at Fujinomiya 5th Station, it was about 16:00.

It’s a great feeling to feel yourself in the clouds while you are in the 5th Station 🙂 Here one of the guides stopped us and warned again: Do you have enough water and food? Do you have additional clothes with you? Did you get your headlights? Are you going back from the same trail? Do not leave the trail… etc. After a bit of chatting, we looked at the summit one more time and started to climb 🙂

There are plenty of signboards on the trail that showing how many kilometers to the next station and the altitude.

And the trail is signed with the ropes tied to the iron bars like the photo below. Although the easiest part is between 5.-6. stations, we were quite tired because we were not used to it. We already started complaining about ache of our legs. We rested sitting on the rocks, stones and earth.

We thought we could watch the sunset while climbing Mount Fuji, but we could not because the weather was a bit foggy.

It took us about 5 hours to get from the 5. station to the 9. station. It’s around 21:00  when we’re on the 9. station. We decided to stay here and getting up at 02:00 and going on. We had not booked in advance to stay here, we found out that there was a room for 2 people and we stayed here paying 6500 Yens. If we were talk about the place we were staying, there were a lot of beds in a room, and I think about 20 people sleeping side by side in this room. There are shelves in the top where you can put your bags. You take out your shoes out of the room. They showed us a so narrow part, we couldn’t fit into there even me and my husband also thin. At first, I could not sleep because the room was cold and, the bed-comforter seemed wet. When I fall asleep, the alarm rang. We could not sleep, but luckily we got a little rest here.

Without forgetting I should also say: Take a few additional T-shirts and clothes with you if you can. We got sweater, cardigan, but we did not have T-shirts. When we went up, our clothes were sweaty, we had to take them out and wear sweaters. Our raincoats, pants, shoes were quite comfortable, we did not have a problem. Also get your food and drinks even before coming to the 5. Station. We couldn’t have enough because of trying to catch the trains, we had to buy them at stations, prices were high, and increasing as we going up.

In order to catch the sunrise at 04:30, we got up at 2:00 and ate something and went on climbing. It was so crowded from the 9. Station to summit because there were so many people climbing for watching the sunrise like us, and we could climb slower. Fortunately we were summit before sunrise and found place in the east for ourselves. We watched the sunrise until 5:30, took lots of photos, and enjoyed the summit. Japan means “land of the rising sun”, and it was great to watch the sunrise from the land of the rising sun.

According to a signboard at the summit, Matsudai Shonin climbed at the summit for the first time in the middle of the 12. century. From the end of the 19. century women were also allowed to climb. At the moment an average of 200-300 thousand people climbing to the summit yearly.

I think this is the wishes tree of Mount Fuji, it have coins on it 🙂

It was around 10:00 when we went down. The bus from the 5. station to Shin-Fuji was about to go on, so we immediately got on the bus. Then we took our luggage and went to Tokyo with the Shinkansen train again. I also took these photos from the train.