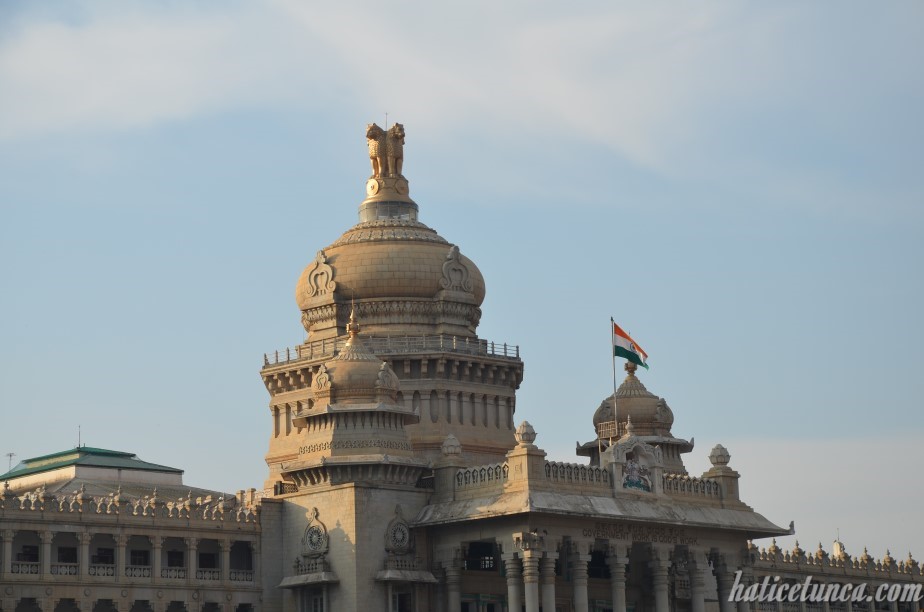 We had an opportunity to see Bangalore for business in 2013. Bangalore is the capital of Karnataka state of India and is known as the silicon valley of Asia. Time is 2:30 hours ahead of Turkey in India. We arrived at Mumbai Chhatrapati Shivaji Airport (BOM) after a 7 hours flight by Turkish Airlines, and after 4 hours break, we arrived at Bangalore Airport (BLR) after 1:30 hour flight by Air India. Currency is Indian Rupee (INR). 1 Rupee was equal to approximately 0.03 Turkish Liras. Traffic works from left side.

Traffic was worse than İstanbul in Bangalore. Horns are blown always, even you can see “Sound Horn OK” writings behind of trucks. Finding a taxi for transportation is very difficult, you need to arrange it previously. Rickshaw called three-wheeled vehicles are used for transportation usually.

Weather was very nice when we were in Bangalore for 2 weeks, neither too hot nor too cold. It rained for a few days. Weather was getting dark at 18:00, so that we didn’t have a chance to tour in the evenings.

Indian food were too spicy when compared to ours. Chicken and rice are mostly used in meals, tastes close to ours. Especially, we liked a dessert called “Anguru Rabdi”.

We started our city tour from Cubbon Park. There are quite old trees in the park. And as in many places in Bangalore we able to see a lot of squirrels.

State Central Library takes place in this park, as well.

Legislative Assembly Vidhana Soudha and its replica Vikasa Soudha located right across this park. Granite Vidhana Soudha was a larger and more magnificent building than I expected. There is a four-headed lion statue, which is emblem of India, on top of dome in the middle of the building. I couldn’t take a photo of complete building because of subway construction.

After taking photos of these buildings, we passed through Cubbon Park and arrived at Visvesvaraya Industrial and Technological Museum (30 Rupees). The museum was quite simple and nice. You can see how instruments in the museum works by trying yourself, I think is very helpful especially for students.

One of the tallest buildings in Bangalore, UB City can be seen from the terrace on the top floor of the museum.

After leaving the museum, we went to the square which is the beginning of M.G. Road. Victoria Statue was located just on the left side.

After taking photos in this park, we went to Lalbagh Botanical Garden (10 Rupees) by rickshaw. I was disappointed here, unfortunately. I expected  it was green and full of flowers, but we faced a garden with no flowers.

Then, we went to Tipu Sultan’s Palace (100 Rupees) by rickshaw again. It was also smaller and simpler than I expected.

The next day we went to a shopping mall close to hotel- Orion Mall for lunch. We went to ISKCON Temple after lunch. We would visit inside, but we gave up after seeing entrance fees.

Bangalore Palace takes place on the list of places to be seen in Bangalore, but we decided not to visit looking at admission fees and reviews.